Most gun owners have at some point faced the issue of carrying their concealed carry firearm, hunting rifle or personal self-defense weapon in their vehicle. Whether with the intention of storing it in their car, or simply to transport your firearm(s) to another location, this is a serious matter that takes some consideration in order to do it safely and effectively.

When it comes to transporting and storing firearms in a vehicle (be it a car, a truck, a van or similar…), there are a number of things to keep in mind. Most importantly, however, the two main issues that you should absolutely prioritize at all times are safety (your personal security and that of those around you) and legality (the legal implications involved with storing firearms in a vehicle).

With these two primary considerations in mind, what you most want to look out for when picking the ideal storage solution for you is A) the type/size of the firearm you intend to store in your vehicle, and B) the potential risks involved. With regards to the first matter, there are different issues involved with storing a handgun, as opposed to storing a rifle. As to the second (and by far the most crucial aspect), your primary concern is and should always be risk prevention. In the case of firearms storage and transportation, the most obvious and critical risks are damage and theft.

Especially the latter is a major problem facing conceal carry gun owners, increasingly. According to federal statistics, over 1.4 million guns have been stolen from their owners between 2005 and 2010 alone; and, unfortunately, many of these weapons were stolen from vehicles. Therefore, finding a storage solution that is secure and well concealed is of paramount importance, in particular for handguns. 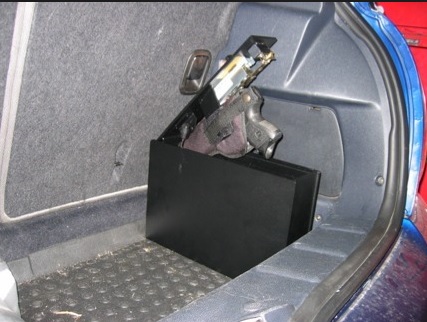 What to look for in a storage solution

As mentioned previously, one of the most important things to keep in mind is that your firearm should not be immediately visible to anybody who looks at the interior of your vehicle. This. for a number of reasons: not only will a visible gun greatly enhance the risk of getting your car burglarized by thieves looking to make a quick buck by selling your firearm… but also because it´s never a good idea to let law enforcement officers see your firearm, at least not until you’ve had the chance to show your conceal and carry license, and display a reasonable degree of cooperation.

The other important thing to remember is that other people who may be traveling in your car with you (friends, family members, children, etc.) should be able to travel in your vehicle safely and comfortably without noticing your firearm. In the case of children, for example, this is crucially a safety issue; but even with friends, they may not be appreciative of your choice of owning and storing a gun in your car. So, overall, it´s best if they don´t see it unless you wish them to.

Ultimately, in the case of carrying a defensive firearm in your car, it becomes a matter of balancing the need for concealment with the necessary ease of access, should you ever need to reach for your gun.

Also, bear in mind that any potential thieves who suspect you may have a gun in your car will most likely tend to look at the floor under your seats, the glove box, and the center console first. So those places should be avoided at all costs for that reason alone.

Where to store a gun in your car

In the case of a sedan type car, the most common choices include:

* The center console: or, more specifically, underneath it. By removing the screws that hold the center console bolted to the floor, you can expose a rather large space which can hold a handgun and some ammunition.* The backs of the seats: in the space left between the springs and the cover on top of them.

* Underneath the seats: not on the floor, but rather attached to the underside of the seats themselves, using an adhesive such as duct tape.

* Inside the door panels: a short rifle could be stored there, provided you take care to leave everything as it was before, so as to not attract unwanted attention.

* Behind the radio: just unscrew, extract the radio and you have a usable space!

If you’re thinking about outside concealment, you could look at storing your gun underneath the bumpers (using duct tape), under the hood (for example, the air cleaner box) or even the trunk, although this is the least recommendable option, since it’s quite easy to detect. But you could remove the lining and utilize the empty space located behind the rear fender, and then just replace the lining. Special care should be taken to ensure that the trunk looks inconspicuous, such as adding some dust and old rags.

As for an SUV or truck (or other similar larger vehicle), all the previous ideas apply, but there are more possible places you could store a gun safely and securely. The same principles as with a sedan are useful here, mainly using duct tape to adhere your gun(s) and ammo to any given surface (underneath the visible parts) or empty cavity left between car parts. Some examples of useful spaces include:

* Spare tires (inside the rim of a spare tire).

With these, or any number of other options, the most important part is to always make sure that the gun is undetectable once stored in its place, and that the vehicle as a whole does not in any way attract unnecessary attention, or peak the interest of thieves in any way. Use common sense, basically.

So, what is the ideal type of storage solution for a concealed gun in a vehicle? Well, given the main criteria explored above, the most in-a-perfect-world solution would certainly be to have your firearm and ammo safely secured in a locked container that is properly concealed and thoroughly fixed to the interior of the car. This is especially true when you need to leave your car with your gun inside it. Another highly recommended option would be a locked safe box (a vehicle-mounted gun safe, essentially). On the other hand, avoid at all costs storing a firearm in the trunk or in the glove box, even if they are locked. These places are very easily broken into by seasoned criminals, and they will be at the top of the list for anybody looking to find a weapon in your car.

Basically, if you´re gonna store a gun in your car – be smart, be thorough about it… and be safe.

link to Can a house floor support a gun safe or need reinforced?

You are in a state of panic and ordered a 900-pound gun safe that measures 3.5 feet wide and 2.5 feet deep. The safe is arriving in three days, and you are worried it will crack the floor. Your...

It is important to ensure that security and safety are prioritized when dealing with guns and other potentially harmful weapons. Finding a good safe can be challenging, especially finding one that is...