If you own or have firearms in your home, then owning a gun safe is one of your responsibilities as a firearm owner. Gun safes can be bulky and heavy with most weighting up to 300 pounds when empty. Thus, if you are planning to move it, you need to take time to plan well, acquire the right gear and the right human labor to do it. Most moving companies understand the hassles to move a gun safe, thus they charge ridiculously high fees some charging up to 500 dollars to do it for you. Thus, unless you have some extra money to spend, read on to find out how you can do it yourself.

How to move a gun safe down stairs

The first step is to get some people to help.

This can be three or four of your friends or pay some people in the neighborhood to help. As a gun safe can be bulky object, attempting to lift one can easily lead to back injury, leg or arm injuries if you try to move it on your own, especially if you want it moved down the stairs to the basement. Thus, ensure you have at least two people to help you move a gun safe.

Get the right tools for the job.

Remember, as pointed out earlier,  a heavy gun safe should not be lifted with your arms unless you don’t mind breaking something, straining your tendons or pulling your muscles. The best recommended equipment to help move a gun safe is a dolly, preferably with straps and a rating of 1200lbs+. The straps help you to drag the gun safe so that you eliminate the need to lift it from one room to another or down the stairs. If you find one specifically designed for the stairs, then that is better, if not use a ratchet strap or a rope. Ensure that the straps are hooked at the bottom of the dolly to enhance the stability of the gun safe when moving it down the stairs. 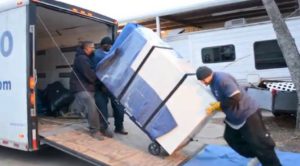 There are several ways to move a gun safe; this is just one of the most common methods. If you don’t want to use the dolly, you can use a hand-truck with an electric stripper. However, be prepared to part with some extra money, as the hand-truck can be more expensive than the dolly. Hiring a professional to move a gun safe can be the best option since you don’t know if your stairs can support the weight of the gun safe. Some people try to do it on their own, only to end up spending more to repair the staircase and hire a professional to move the gun safe which they should have done in the beginning. So think carefully before you choose the best way to move a gun safe in your home.

link to Can a house floor support a gun safe or need reinforced?

You are in a state of panic and ordered a 900-pound gun safe that measures 3.5 feet wide and 2.5 feet deep. The safe is arriving in three days, and you are worried it will crack the floor. Your...

It is important to ensure that security and safety are prioritized when dealing with guns and other potentially harmful weapons. Finding a good safe can be challenging, especially finding one that is...