While owning a firearm is legal, the rules and regulations surrounding carrying and storage of firearms vary from state to state. Some states require that the handgun or pistol remain unloaded and carried in the trunk of the car. Any one carrying needs to know the different regulations in interstate transportation as being ignorant of the rules could lead to hefty fines or even legal action. In addition to this, there are places where one cannot carry a firearm. These places include: the post office, a courthouse, educational facilities and church among others. Avoiding these places altogether is not possible. Any firearm holder therefore has to have a solid storage plan in the car whenever they have to visit such places.

It is not advisable or even legal in some states to have a firearm in the glove compartment of the car. Such storage makes it easy for burglars to steal the pistol as it is easily accessible. Keeping a gun safe in a car also moves it out of reach for children and anyone else who may be riding in the car. There is a need for better storage and this is commonly achieved through buying and installing a gun safe in the car.

There are different types of safes that one can use in the car. A console safe is one of the more popular safes in the market. It is installed into the cavity of the console. No one except the owner knows that it is there. For this type of safe, installation is done through bolting the safe into place. It is not portable but it is out of sight once the console lid is lowered. One of the benefits of having this safe is that it allows the owner access to other USB ports as well, even after the safe is installed.

Another common type of safe is the small variety. While these safes are great for car use, they may not be as secure as one would want them to be. They have locks, which are easier to open when compared with the larger gun safes. Keeping a gun safe in a car requires a lock that is not easily manipulated. The best types of locks to consider are the mechanical ones. It reduces access by children or even robbers. While small gun safes could do with better locks, the bottom line is that no robber has enough time to cut through the lock as this would make noise and draw attention. The small safes safeguard against smash and grabs. 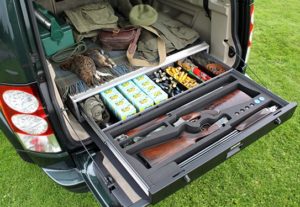 Some examples of gun safes

Some of the more popular safes for cars include:

Unlike other safes, a gun safe for a car does not require complicated installation. The safes are manufactured from high quality steel, which is not easy to cut through. They often come with a metal cable to attach them in the place of choice within the car. Once this cable is in place then the gun safe is ready for use. Other safes can be easily removed. This is important because it makes carrying the firearm easier as one can move the gun safe from one car to another. People who use public transport also tend to carry the same safes around for security as well. These safes should be kept out of eye view. Imagine how easy it would be for a robber to just take off with the safe.

The other common method is bolting the gun safe in the car in one’s place of choice. This can be done at the mechanic’s. It is a more permanent safe and should be installed in a nondescript location that only the firearm holder knows about.

Some gun safes are mountable, where one can attach and detach the safe onto or below a surface within the vehicle. Installation of these is not difficult as all one needs to do is mount the safe properly and in a hidden location.

Prime places to keep a gun safe in a car

Under the seat and in the trunk are the most common places to install a gun safe. The idea of a safe is that the gun should be out of sight and out of reach. However, it should not be too far away that one is unable to access it easily. If a gun is for protection, then keeping a gun safe in a car should not be misconstrued to mean making the gun altogether inaccessible to the owner. The other benefit of having a gun safe is that one can store other valuables in the safe without worrying that they might be stolen by robbers who specialize in breaking into cars. The only problem with these popular locations is just that. They are popular and are the first spots to look in for anyone who would like to steal a firearm.

Carrying a firearm is a responsibility that should not be taken lightly. Keeping a gun safe in a car is a commendable measure that shows the carrier also takes into consideration other persons who may use their vehicle or even thieves who may try to break in and steal a pistol alongside other valuables. The types of safes to choose from are a number and each comes with its own installation mode. While others require mounting, others may require bolting or clasping into place. The key is to read through the installation guide in order to get it right. Researching beforehand is also important as one is able to establish what type of security measure they would prefer. It also provides the opportunity to go through different options in the market in order to get the best for one’s car and pistol.

Protectandlock.com, a leading provider of online security solutions, recently announced the acquisition of the domain britishshootingservices.com. This important move is yet another example of...

Continue Reading
link to Can a gun safe dehumidifier start a fire?

A gun safe dehumidifier is a device that helps to remove moisture from the air inside your gun safe. While this can be helpful in keeping your guns and other belongings inside the safe dry, some...